We usually associate the work of thatgamecompany to Jenova Chen, the creative genious that developed Cloud. But the work Kellee Santiago does is really important too, because she is in charge, altogether with Robin Hunicke, of converting the ideas of the team in something solid. At the moment, they are finishing Journey, and Kellee has been so kind to answer «a few» questions for us.

The interview in English is below, and in Spanish it is in the previous page.

Can you tell us how did you start thatgamecompany? How did you meet Jenova Chen, how did you decide to start your own company, instead of working for others? 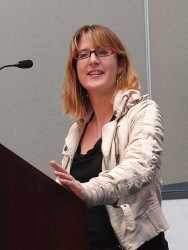 Jenova Chen and I met in graduate school – the Interactive Media MFA program at the University of Southern California, School of Cinematic Arts. He had made some games previously with friends, but had initially applied to the school to pursue digital and interactive animation. I came from a theatre background. But it was there that we both discovered a passion for expression through video games. I helped out towards the end of a student project he was working on called, Cloud. Cloud was a game that intended to touch upon an emotion he thought anyone could relate to – the feeling of being a kid, daydreaming, looking at the sky. And the incredible response we got from players who had really been touched by that game inspired us to continue to make games that we felt could be more emotionally relevant and accessible than what the mainstream marketplace was offering.

However, we still were planning on going the normal route at that time – putting in a few years at a large studio, build up our savings and our connections, and then go on our own. What we didn’t have control over was that we happened to be at a time where all of the large companies were looking at digital distribution, and looking for content to place in these new channels, like PSN, XBLA, Steam, and WiiWare. Sony Santa Monica approached us with a three-game deal to develop for PlayStation Network, and that’s when we decided to seize the opportunity and create our own studio right then.

Did you think you would reach fame as fast as you did?
No, definitely not. I was recently combing through some old presentations, and found one from 2006 in which I was asked to speak at the Hollywood and Games Conference in Los Angeles, and I spoke to this point! Digital distribution allowed Jenova and I to go rapidly – within months – from total obscurity, to gaining a wide audience of supporters, fans, and people who thought of us as some kind of experts on the future of gaming! It’s been a wild ride.

What was the hardest part?

We didn’t know what we were doing. At all. We started a company with very little experience in management or leadership, and we made a lot of mistakes. Some of which were very hard to recover from – losing the trust of our teammates, not knowing how to schedule a commercial game title…. it’s been a very intense 5 1/2 years for myself. Seamus Blackley told me once, «The good and the bad of owning your own company is that when things go well, you totally own that. And when things go really wrong…. you own that, too.» But unlike being at another studio, you get the opportunity to figure out the solutions yourself. There’s no boss to complain to. It’s just you! I’ve learned so much and grown so much as a human being.

And what was easier than you expected?
I think we were really fortunate in getting a great team of developers from early on. John Edwards and Nick Clark signed on – Nick, having working with Jenova only on flOw, and John we knew from the independent game festival scene. Everything could have gone the other direction, had we not been able to make good games from the start. And those guys really made that happen.

In your history as a company, what is the thing you are prouder about?

When I started thatgamecompany, I was so naive. I couldn’t see what would go wrong. In the time since, I’ve seen other friends and colleagues start their own studios, too. And some have gone well, but others have failed. It’s made me realize just how much of a risk we were taking. I’m really proud we were able to weather all of the storms and create flOw, Flower, and Journey – that’s what I’m most proud of. We did what we said we were going to do.

About the videogames industry

In which point do you think the videogames industry is right now? If you compare it with other disciplines, is mature or not?
It’s getting there. The line-up of games for 2012 definitely has me excited. Games like Dear Esther, Fez, Q.U.B.E.…. they are very different from one another, and demonstrate the wider spectrum of experiences possible in video games. The upcoming «Art of Video Games» exhibit at The Smithsonian in Washington, D.C., I think it also a great step forward. I hope that it will lead to a greater dialogue about the place of video games in culture.

I have been in several game developers conventions. Do you think the world is different inside than outside? For example, I suppose you get a lot of recognition inside, but have you been stopped at the street or something like that?

Hah, yeah….no. Jenova and I were onetime at an airport after just such a convention and he leaned over to me and asked, «I wonder how many other people here are ‘famous.'» We do have to be careful to not be so myopic. One way I see this manifest in our industry is that those of us working on experimental games will often forget that knowledge about these games isn’t really wide-spread. It’s important to keep talking about them, even when we might be sick of them, because many people around the world still haven’t experienced a game like, say, Everyday the Same Dream.

How is it to be a reference in the US industry? Do you have regular meetings with executives of other well known companies? The financial system believes in your work (if you ever needed it; some don’t)?
The video games industry even at a global scale is still a pretty small group of people. And many people in games are so helpful and giving of their time when you need advice. I try and pay that forward.

Journey seems to be the most complex game you have ever done. As a company, do you want to make more complex games each time, or you will flOw from the simplicity to the complexity organically?

A little bit of both. We’re all people they enjoy a challenge. We take the hard road, because it allows us to learn and grow more as developers. But we’ve also gained confidence on each project, so the growth of our games kind of happened organically from that.

Do you think Journey will be taken as seriously as other «non digital distribution» games? I know digital distribution works really well at the US, but at other places throughout the world… Do you think you would impact the same way if you release you game at retail?
I think we hit a different audience, but then again, for our games, the PSN market is a great place for us. Putting Flower in a store might be a very hard sell, even though there are some players that only purchases disc games, and don’t download.

And finally, we are eagerly awaiting to play the game. Which percentage of the game is done, more or less?
It’s done! (Which is why I have the time to answer these questions.) We await release now! 🙂

You have worked as a team with Sony Santa Monica during a lot of years. Is it hard, is it easy, are they helpful… Tell us, how does this combination work?

They have helped us so much. As I said, we didn’t know anything about anything when we started our studio. The people at Sony Santa Monica helped mentor us in production and development processes that allowed us to realize our vision. Creatively, they really support their developers. We have some crazy ideas about what we want to do in games, but they always allowed us to go out on a limb and take those risks.

This is the last of the games you signed with Sony. Are several companies throwing «mermaid songs» to you? Or were you too concentrated until you finished Journey?
We’ve been way too focused on Journey – there are only 12 of us! We’re just now coming out of the fog of development and taking a look at what’s possible.

Are you planning on attending to a videogames event in here? I know that you have been invited several times.
Hopefully, soon! Now that Journey has successfully been completed, I hope to meet our fans all over the world.

What is your favorite game ever?

And at present time?
The card game, Citadels. Such a fun way to pass an afternoon with 7 people!

If you could have worked in a game for other company, which game would have been?
None. Honestly. I know it sounds cheesy, but there’s no other game I would have wanted to work on more than Journey. I’m so proud of it – it’s exactly the kind of game I want to play.

Do you want to tell something to VideoShock readers?
Thank you so much to those of you that have supported us these past 5 1/2 years. Your letters, and especially your purchases of our games, have made a huge impact. It shows people that there are gamers who want different kinds of experiences, and that these experiences are worth creating.